Hunting public land in Texas is new to me. My first waterfowl hunt is at a local wildlife management area (WMA). This place is a first come first choice, so you line up outside the gates in advance of the 4:30am gate opening . I was in line camping with my son, Oliver 6, and since we were getting up early we turned in about 7:45.

Around 11:30 it got real for the fellows three spots ahead. First, there was celebration. When the coyotes started howling, so did they. Then, apparently, a rattlesnake joined the fun. This led to the sounds of crashing lawnchairs, I believe a BBQ pit fell onto some decoys, which would explain the faint burning plastic smell. Crisis resolved, but they soon ran out of the good stuff, bud light, and had to crack into the Natty. Around 12:30, two of the party turned in.

At this point, the conversation turned rather dour. See, the first fellow was apparently a good family man. Which had been celebrated ad nausea in the prior hour.

Though once married the second chap apparently had trouble maintaining monogamy and apparently he now only sees his kids on the weekend. At this point he was sobbing loudly, uncontrollably, and with a strangely guttural moan sprinkled in at times. Even in my dark camper in a sleeping bag, I felt really awkward.

I’m no Frasier Crane, but maybe the married friend shouldn’t have stated, “You know your ex wife was such a beautiful, sweet girl before you were married. You really screwed that up.” There was now angry shouting, then SLUT repeated in decreasing volume, about 50 times. The sobbing grew more intense. At this point I made sure my BB’s were handy, I thought 4s might be a bit light if I needed to intervene.

As luck would have it, they apparently hugged it out and everything was copacetic. UNTIL THE BIG DIESEL TRUCK SPED PAST THEIR CAMP.

This put the sobber in a state of rage and he cursed the speedster with a flare really only fitting at an SEC football field. This lasted a good 10 minutes. By now the previously bedded companions of theirs rallied after their 15 minute nap and managed to stoke the flames a little by commenting on the overall lack of civility of today’s drivers.

There was a little hushed mumbling, and this gem was sprung: “that’s the thing with you man, why I don’t like drinking with you, you’re always getting drunk always making homosexual advances towards me.” I’m not passing judgment, I just didn’t predict this sort of conversation taking place while waiting to get a good duck hunting spot. I can’t verify this, but my son claims he heard the sound of a fleshy slap.

Then some yelling ensued.

I’m not sure what the sobber’s role in the latent homosexual behavior was, but someone in the group noticed he was gone. Apparently he left to straighten the speeding truck guys out and it was mentioned how he always looks for a good fist fight after drinking. It was agreed he had to be stopped and the sound of stumbling, swerving running could be heard outside of my popup. I didn’t hear gunshots, so I assume everything was fine.

When they returned it was almost 2, and now the natty light was gone and they decided they should get to bed. So they went. And I was asleep soon after.

Anyways, it was an interesting prelude to a great hunt. We limited out on ducks within 15 minutes, missed some specklebelly geese, and added 6 pouldeau because we’ve heard they eat well. 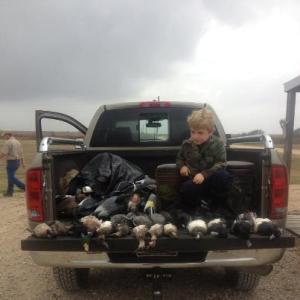