Never take advice from a cabbie on a big game hunt.

Nothing gets me more pumped than planning a big hunting trip.  Obsessing over draw odds, figuring out how to get the meat, fur and various skulls, horns, and antlers home, is awesome.  And then there’s the gear, I’m always upgrading and replacing much to the concern of my wife.  All in all, there’s a ton of planning that goes into a big game hunting trip and some of it doesn’t involve hunting at all.

The biggest obstacle many hunters face is the shear size and scope some hunts require. My most recent mega-hunt was due to a favorite author of mine, Steven Rinella.  He has a show now and on it he hunts black bear, black-tail deer and sundry other whatnot from a cabin on Prince of Wales Island.  2012 was the last year you could buy a non-resident over the counter tag to hunt bear, so I opted for a spring bear hunt in Alaska.

I did some research, my wife called it stalking. I will admit at one point I was watching a Rinella family wedding video, but come on, I was wanting to see how rough the seas were and I always cry at weddings… Anyways, I had a great plan for how to kill a bear.  That was the easy part.

The hard part was  I had to fly from Houston to Seattle to Ketchikan to Thorne Bay and back again, without losing my rifle, having my meat rot, being arrested by TSA, or reinjuring my father’s hip, who had it replaced the December before our May hunt.  Oh, and I needed to secure license, tags, lodging, a 4wd Truck, and a skiff with a 20hp motor for us to tool about the ocean where they film Deadliest Catch.

Everything was fine until we had a layover in Seattle on the return trip home.  We were tired and wanted a good bowl of chowder from a local hole in the wall I’d read about.   I don’t know, maybe were just too exhausted to think, but he immediately rejected our choice, and damn near begged us to go to Salty’s where everyone ate.  So we acquiesced and 25 miles and half an hour later, we were seated here: http://saltys.com/.  Fine dining, $40-$50 a plate, not what you want when tired and grungy from being in the Alaskan wilderness or wearing camo.  I will say the folks at Salty’s were really nice and seated us anyway and even let us hitch a ride back to our hotel in their concierge shuttle service.

So the lesson was this: never take advice on where to eat from a cabbie when planning your next big hunt. 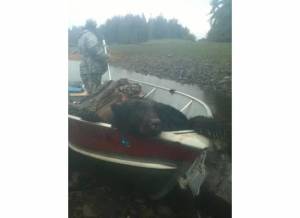