You hear about quality time, but I’m a big believer in quantity time.  Some of my best times both as a child and a parent occurred as pure luck. The more time you spend together, the more likely it will suddenly turn out great.  This was one of those times.

For my little guys, action is the name of the game when it comes to the outdoors. Duck hunting is a fabulous way to break them into the hunting and with duck season around the corner,  I hope you’ll take some little guys or gals out hunting with you–though it may not seem easy or even practical.

Some hunts lend themselves particularly well with bringing munchkins.  A dove hunt is simple:  make sure there is plenty of shade, hydration and their BB guns.  Toss in some OFF, sun tan lotion, and long pants and you will be good to go. Even deer hunting, when done out of a spacious box blind shielded from the elements is a good way to hunt with kids.

But duck hunting takes a little more effort. Water, cold, nasty weather, mud–mother nature doesn’t pull any punches during duck season. Throw in waking up way before the posterior end of dawn, and its easy to see why many Dads just choose to let their kids sleep during Daffy Season.

So last year when my friend John invited me to Corpus to duck hunt I originally planned on coming alone for the hunt.  However, my wife developed a serious case of house-itosis, so she and the boys came along since I was getting a hotel room anyway.  We drove down and that night I left and met up with John for an evening hunt. 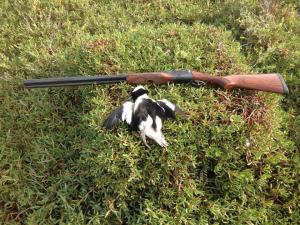 Though he hadn’t mentioned them, John brought his oldest daughter and son.  I didn’t mind at all.   I hadn’t asked if this was a kids hunting trip–being the guest and all–and I felt rotten for not packing Oliver’s hunting gear.  We hunted that night, (more of a scouting trip since no ducks flew over) and I returned to get Oliver as outfitted as I could.

Thankfully, Corpus Christi is not cold.   That night we pieced together the warmest stuff he had:  A fleece sweatshirt on top of his favorite white Longhorn Jersey, a pair of sweat pants under jeans and some blue crocs.   Not exactly what you’ll find on the pages of a Cabela’s catalog.   Turns out you can kill a few ducks without camo.

Some 70% of the redhead population winters in the Laguna Madre, and we had several land among our three dozen decoys before legal shooting time.  Oliver was sleepy and Jack was sipping some hot chocolate when John said, 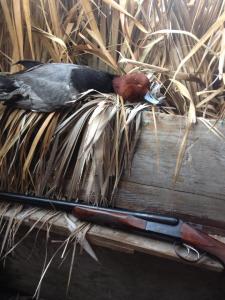 He fired, and I pulled the trigger but forgot to take the safety off.  I was using a new Stoeger double barrel  I’d picked up to be my devoted duck gun and wasn’t as used to it as my trusty Remington 1100.  I flicked off the safety and scared a straggling duck that was probably out of range.  John, on the other hand, took his limit of red heads in one pass and I came up with nothing. After those were gathered and the blind had grown silent Oliver asked,

“Daddy why did you miss so bad?”  The amount of disdain generated in that 6 year old’s voice was impressive.  I chuckled and assured him I was in fact trying.

Then, cutting through the wind like squadron of Blue Angels, a flock of bluebills bombed us from behind and I was able to redeem myself in my eldest son’s eyes with a double of my own.

Action was steady and within an hour we had our limits.  Oliver’s first duck hunt wasn’t well planned on my part, but he loved it.   I didn’t plan on us having one of those great father-son experiences, but it happened. Strangely, every other duck hunt last season included some sort of foul up.  Getting a bit lost on the public land, forgetting gloves, or being kept awayke by a group of rowdies as told here in my inaugural post:  http://wp.me/p3bCKM-d

Despite some of our misfortunes, I look forward to spending more time with my boys duck hunting this year.  Who took you duck hunting first?  Do you have any advice about bringing little ones along? 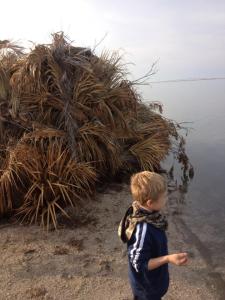