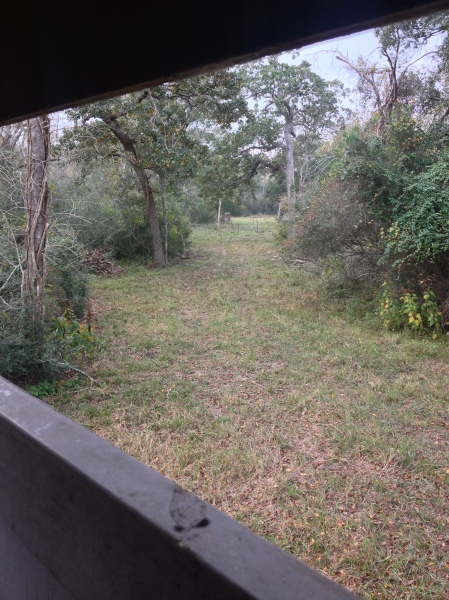 Back during our cold snap a week or so ago, my buddy at church Clayton and I talked about how the weather had cooled enough to go after some pork for the freezer.   We met up at noon yesterday, shot the breeze awhile, and embarked on our hour drive north to his land.

Thick with live oak, post oak, pecan and various shrubbery underneath, this portion of the gulf coast prairie is chock full of a deer and pigs.  Like most of Texas, this is low fence, private property hunting.  Also, this ranch shares a border with a high fence operation.  As we neared our parking spot, one of the giant deer from the high fence neighbor stood just a few feet from us on the other side of his 8 foot high fence, staring.  There is something comically vulgar about these types of deer with their headache inducing racks, and giant yellow tags in their ears.  We laughed about the odds of an escapee walking across our path and what the appropriate course of action would be.  I’ve decided if I do shoot an escapee, I must leave the tag in the ear when I have it stuffed.

Clayton forgot his Off, and in the balmy 75 degree weather he was going to need it.  I was glad, because I preferred we hunt together on my first trip to his family’s beautiful ranch near Ganado, Texas .  Also, anyone I can show the benefits of a Thermacell to will be forever grateful.

Two weekends ago, I made the poor decision to leave my rifle and first team hunting equipment at my father’s place, 6 hours to the North.  I had intended to return the next weekend and hunt, but of course, life got in the way and I didn’t.  This left me hunting with my antique British Enfield 303, which is open sights.  I’m only good to about 100 yards open sight, so of course I expected all of our pigs to show up about 200 yards away.

We arrived at the ranch, loaded up and made a short quarter of a mile hike to our tree stand.   On the way there, a strange buck presented itself at about 75 yards.  One antler appeared to be a four point and the other was either a broken tine with 1 point or a fork horn at best.  We considered taking the shot, but ultimately passed.  That’s a good buck for December.

Climbing into the stand, we were both sweating.  But not long after, a cool front from the north blew in and took away the humidity and the heat.  Yellow pecan leaves were floating to the ground like confetti as we traded hunting stories and relaxed in the woods.   After about 20 minutes, two doe and a yearling stepped into the shooting lanes.  Soon after a young 7 point, with good mass and about 13.5 inches spread came out following the doe.  Clayton’s family tries to take  to take mature 4.5 + year old bucks. This buck looked about 2.5-3 years old, legal but young.    This will be a fine trophy next year. 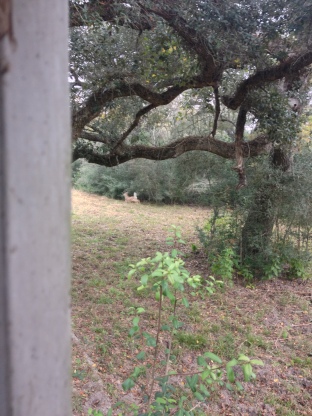 He left, and soon a sounder of pigs about 250 yards away appeared.  We hoped they were working their way toward us, but they stopped about 200 yards out.  Being the good host Clayton wanted to see if they got any closer so I’d  have a realistic chance, but they didn’t appear to be closing in.  I encouraged him to blast away.  He steadied himself, shot and missed.  The pigs ran off. 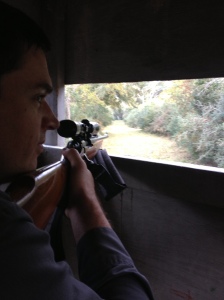 15 minutes later, a small fork horn appeared directly behind our stand.  Head down, he was hanging out just munching away at some corn we spread for pigs.  Eventually he winded us and bolted.  As we remarked on his carelessness, the hogs reappear at about 150 yards.

Earlier we agreed Clayton would shoot first and I would clean up.  He fires spinning a big sow who stumbles out of sight.   I pull the trigger, and nothing.  My gun jammed.  I’d just shot it a month ago with no issues.  My first thought was I’d never taken the safety off, no luck.  It was jammed and I couldn’t work the bolt action.  Worse still, the safety was stuck in the firing position with a bullet chambered.  Fortunately, we were able to “unfreeze” the action and its back in working order.

Meanwhile, the pigs, about 20 in all, reappeared to our left.  Clayton sent a volley of shots that would have made the rifleman himself, Chuck Connors–proud.  Unfortunately, none found their mark.

Despite seeing the big sow spin from Clayton’s earlier shot, we never found blood and couldn’t pin point the exact entry she took back into the woods.  After a diligent search, we decided to call it a night.   No pork belly for me to cure on this hunt, but nonetheless it was a grand time.