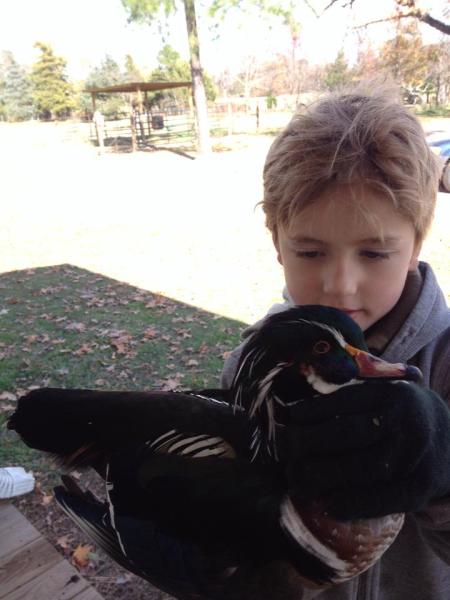 I love bird hunting.  But quail populations have been decimated in North East Texas, so your chances at upland game other than dove are limited to pen raised birds who don’t fly high or fast.  Plus, you end up paying by the bird which is sort of like shooting your own chickens.  Not that there’s necessarily anything wrong with that.

After a big turkey dinner and some slices of pumpkin pie, my oldest and I slipped to the creek bottom to try and flush some wood ducks and perhaps nab a squirrel.  Armed with a Daisy BB gun and my trusty Remington 1100, we started.

The method I use for jumping wood ducks is straightforward.  You creep to the edge of the wooded creek, and peek over the edge at the last minute.  For some reason, you don’t have to be terribly quiet; the woodies flush only when they see you.  Deep banks ensure the wood ducks don’t see us until we are looking down at the water.  You have to be careful when you approach long straight sections, because as you look over the edge, ducks out of range down the creek will spook.  My general rule is to approach bends in the creek first, and then the straight portions later.  Its better to have a couple other hunters for the straight sections because if you are spaced out you can ensure someone gets a shot.

Easing to the creek’s edge we failed to jump any on the first three attempts.  Oliver’s exasperation was growing, but he did a good job keeping his BB gun’s barrel facing in a safe direction and crept as stealthily as a boy in rubber boots can.  I like to use #4 or #6 shot, steel of course, for the wood ducks and I’ve found both kinds work fine on squirrels as well.

By the fourth attempt we were deep into the woods.  Pin oaks, red oaks, birch and elm loomed over the creek as briers grabbed at our pants legs.  The bend in the creek in front of us gave me clear shooting to the north, but south was obstructed by a wall of grapevine, beauty berry bushes and small ironwood trees.   Crouching low, we stepped quickly to the streams edge and up came three wood ducks, whistling as wings beat against both water and air.

I shot well, actually too well as the limit is only three and I connected on all my shots.   I’d rather have had a couple different jumps.    As I surveyed the creek, one duck was on its back, leg kicking when I heard, “thump” and the rolling metallic  sound of BBs sliding up and down as Oliver recocked and took aim and shot the duck again.

“Yea, but he was still moving and alive when I shot him twice and now he’s dead and not moving!”

“I don’t think……well, you know what, that’s pretty awesome isn’t it…”