A new season is upon us.  My first born is now old enough to use a high powered rifle under supervision, a day I’ve dreamed about since before he was born. So my sons and I headed north last Friday for a weekend of hunting, scouting and deer season preparation.

At a quarter till 7, we were overlooking the alluvial flood plain of Lilly Creek, in what we call the Hauer bottom.  Pronounced in deep East Texas drawl as High-yer, it use to abut land owned by a German family who was at odds with Kaiser Wilhelm during the first world war.  He’d complain that German families could live off the farm land where my grandfather would turn his plow mule around.  Now, it’s the most remote area of our familial lands and gets the least amount of human pressure.  Surrounded by forest and accessed by a dry weather only road, it is where I learned to hunt. Squirrels abound in the encircling forests, wood ducks use the flooded timber as the creek rises, and predators lurk in the meadow just as I have since my middle school days. I shot my first deer here.

A short hike and we were seated in our two person tree stand drenched with sweat.  Oliver, less than thrilled by the sweltering 99% humidity, was nevertheless excited to be shooting at something besides a paper target.

In less than ten minutes, pigs announced their presence with snarls and shrieks from the forest behind.  The first time you hear pigs doing their thing in the wild is quite an experience, which was not lost on my little man. 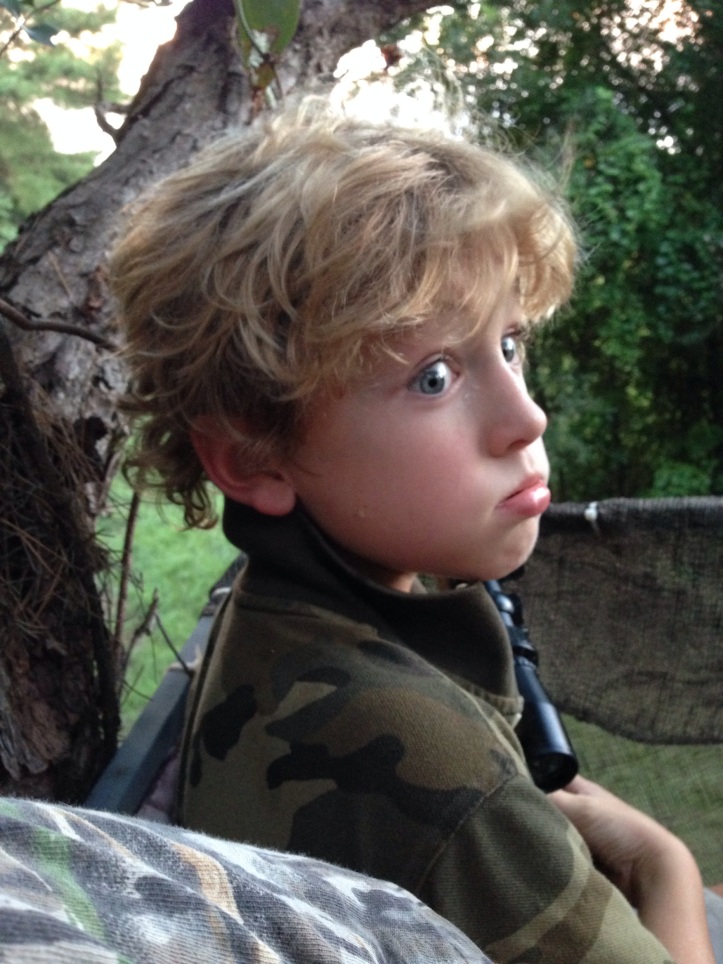 At times it sounded like the herd was just behind us, and at others they seemed to drift further away.  We could hear them criss-cross the small spring fed creek that runs parallel to the pasture just 15 yards behind us. This went on for about half an hour.

Suddenly, a large lone boar shows itself to our right.  Black as coal, its gate was hurried.   I look to see if Oliver was taking aim, but he’s staring at me, mouth agape and pointing.

I nod to him to hurry up and shoot. He raises his gun, pulls the trigger…click.  Forgot to take the safety off.

Now the boar is about to escape behind a tree island so I fire quickly and he spins and drops.  He then stands up, growls and runs a half circle, as Oliver attempts to draw a bead.  The boar abruptly sits, and falls over.  He moves as if to rise again, and I tell Oliver:

“Choot’em!” in my best Swamp People impression.  He does and the porker quits moving.

About three minutes later, the pig hasn’t moved.  We decide to go check on him, and Oliver scurries down the ladder.  Leaving his gun with me, he doesn’t wait and gets halfway to the pig when I call out to him:

As if on cue, the sounder of pigs behind us let out another chorus of screams.  Oliver flies back to the ladder and was half way up and almost in my lap in no time.   We both had a good laugh recalling Steven Rinella’s recent bull moose episode.  (Which, by the way,  is one of the best moments I’ve seen in hunting television.) We waited another five minutes to see if they too were on their way to us, but I decided I had enough to clean.   We eased down and looked at our pile of pork. 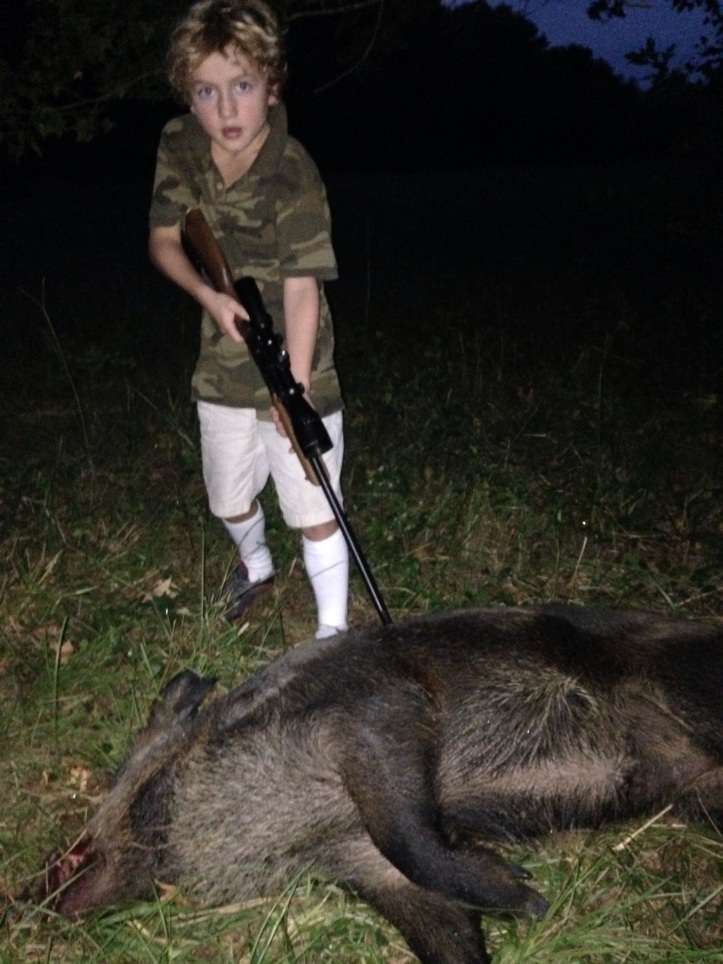 As excited as he was, Oliver did chastise me for shooting first.  Still, when I explained how he “finished” him, all was right with the world.  As a sign of the changing of the times, the first thing he asked after a few pictures was for my phone to text Mom the news.  I told him to call her instead and he told her and his 2 year old brother of our heroic encounter.  This is our second tag team effort, but O admitted he wants a solo kill soon.  This fall is going to be epic. 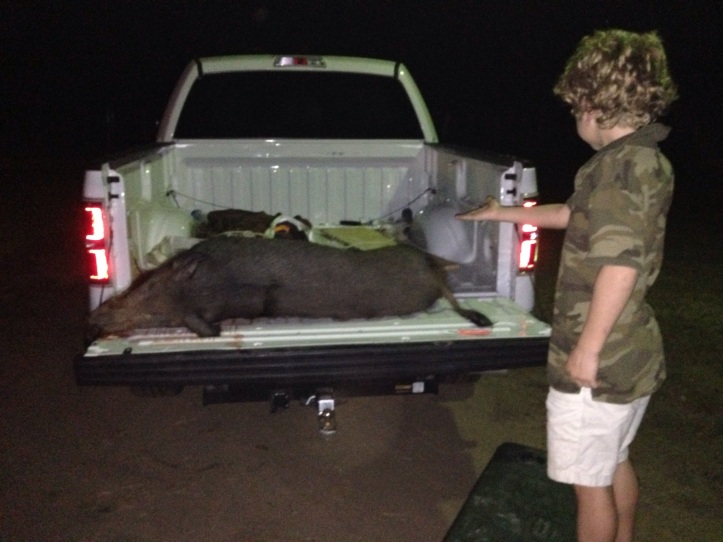 As we rolled up to the house, my middle son who elected to forego hunting and play on the slip and slide with his grandmother, met us at the driveway and was equally excited to see the pig.  I think it’s important to be realistic with your kids and the outdoors.  Of course, I want my 5 year old to come hunting with me every time and become as entranced by outdoor manly pursuits as I am.  But the truth is, he had more fun acting silly with his aunt and grandmother than he would have been sweating and swatting mosquitoes with his brother and I.

After putting on some gloves, both boys pitched in and helped me breakdown the carcass.  I used the gutless method for the first time and though I didn’t do it quite right, I can see the method has potential.  Keegan was as excited about helping to clean the pig as Oliver was to shoot it.  Honestly, I wouldn’t have predicted he’d be into it so much.  That’s the magic of fatherhood, special moments are often spontaneous and unexpected. 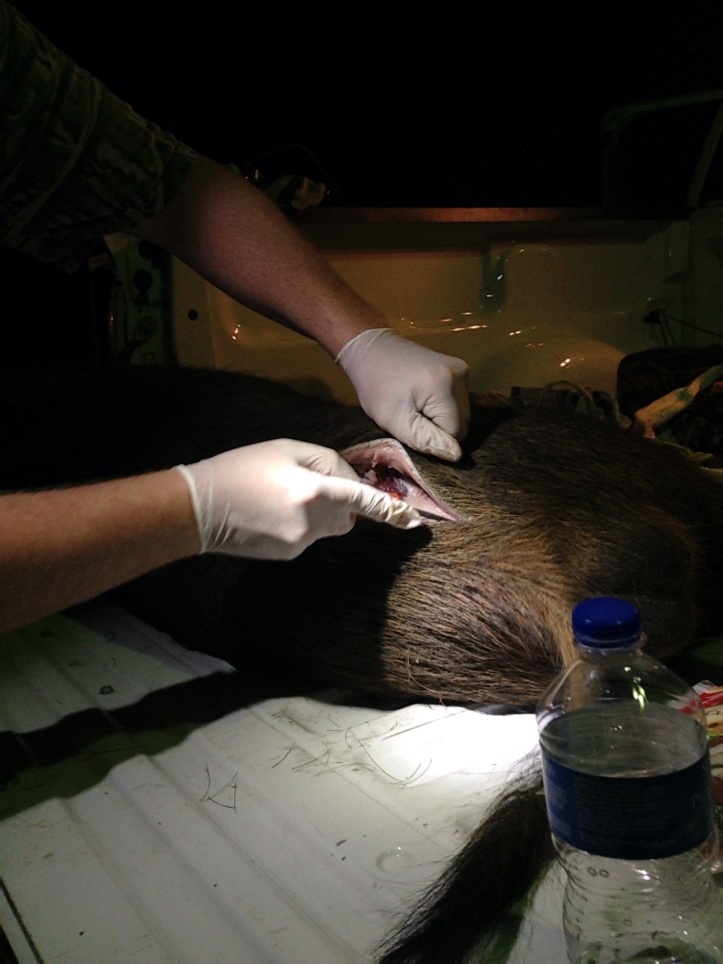 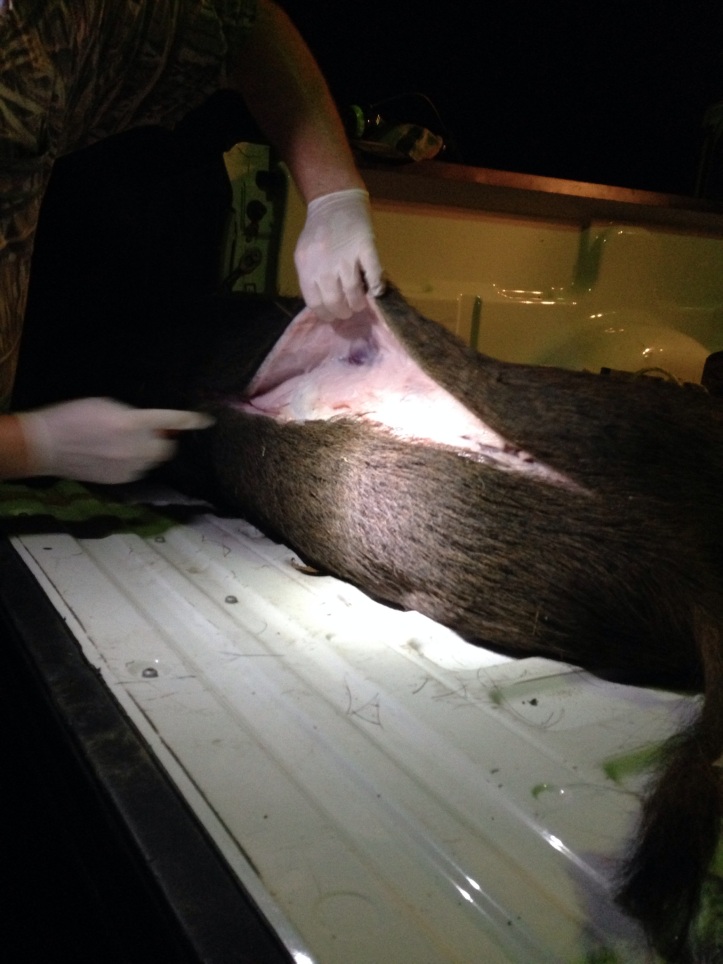 Alive at a quarter till 8 and cooling in the ice chest by 10, I found butchering the pig in upper 90 degree temperatures not as unpleasant as I had expected.

Saturday morning I slept in.  We shot bows, did some scouting and the boys rode horses with their aunt.  The flood gates opened around 5:30 and without rain gear, we chose not to hunt. 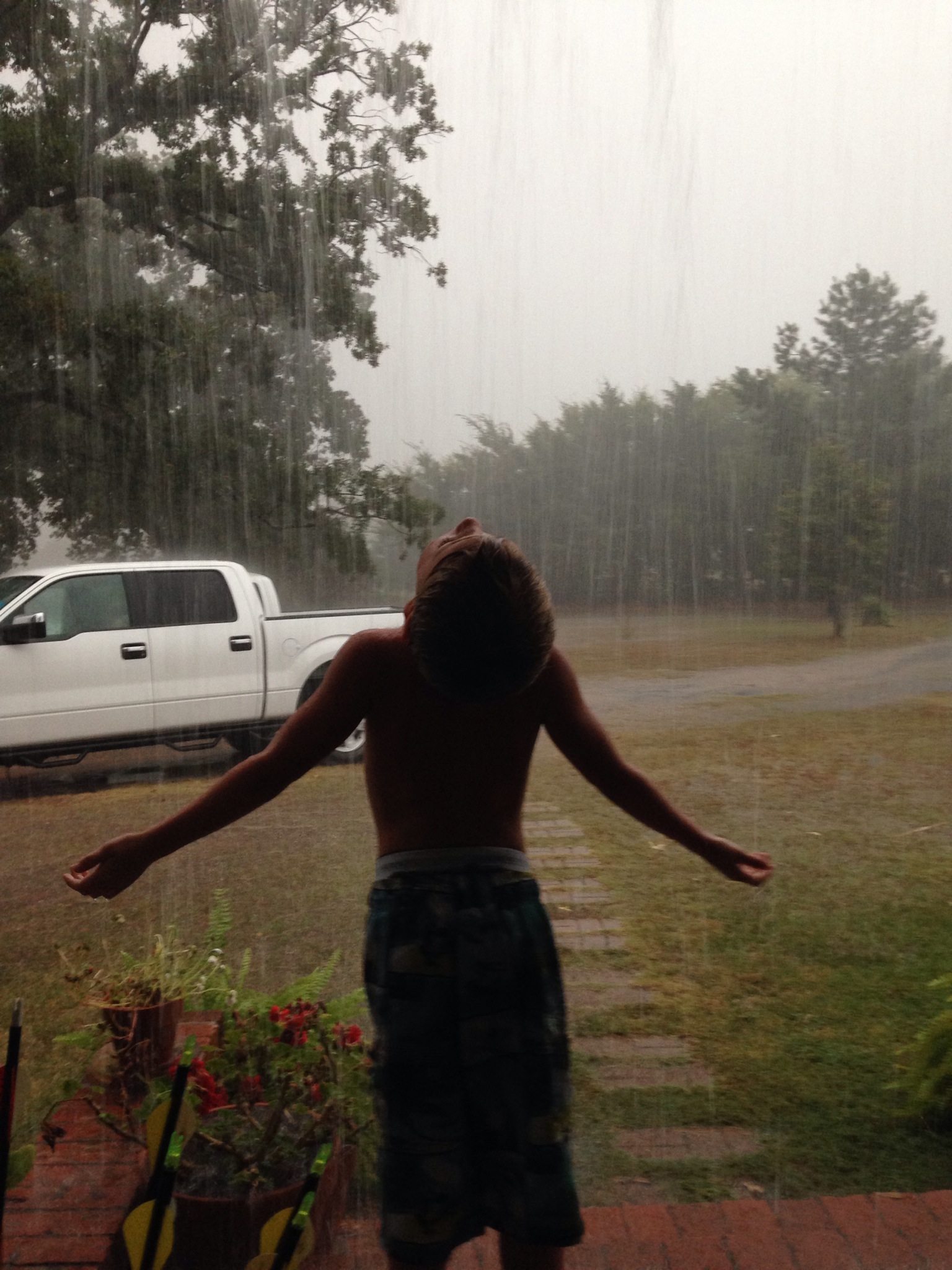 They boys found time to do some trick riding with their aunt. 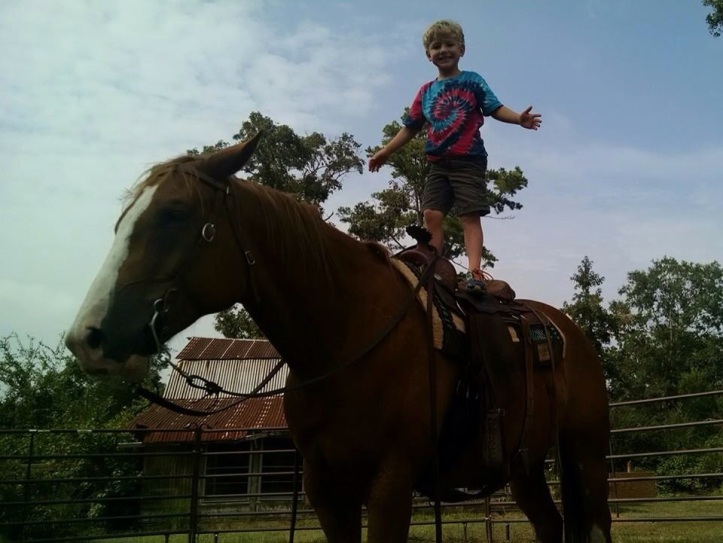 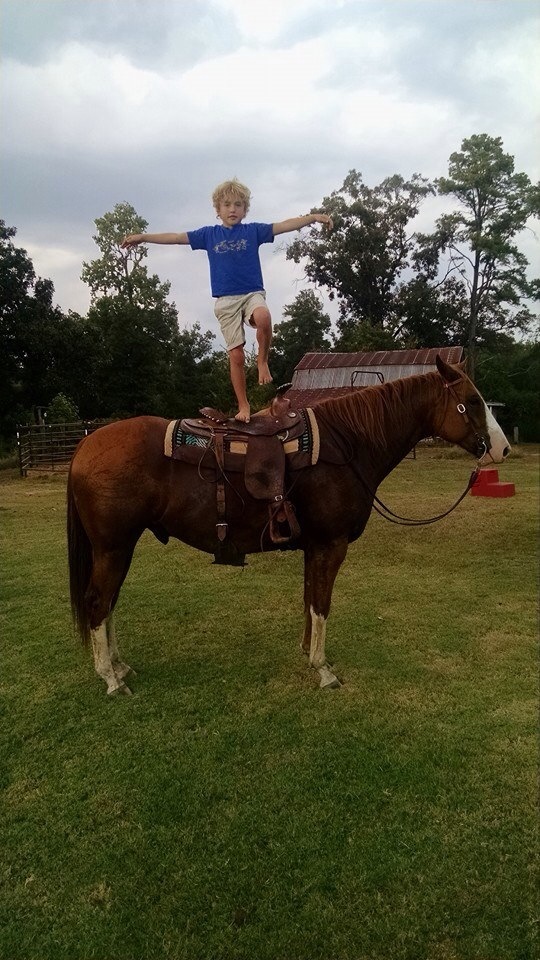 We estimated the pig to be about 160-180 pounds, my biggest to date.  Packaged and frozen, I brought home about 85 pounds of meat including the bones.  I hope to shoot many more, and all signs at the farm point to being a great deer and pig year.  Hunting season is upon us my friends.  Rejoice!