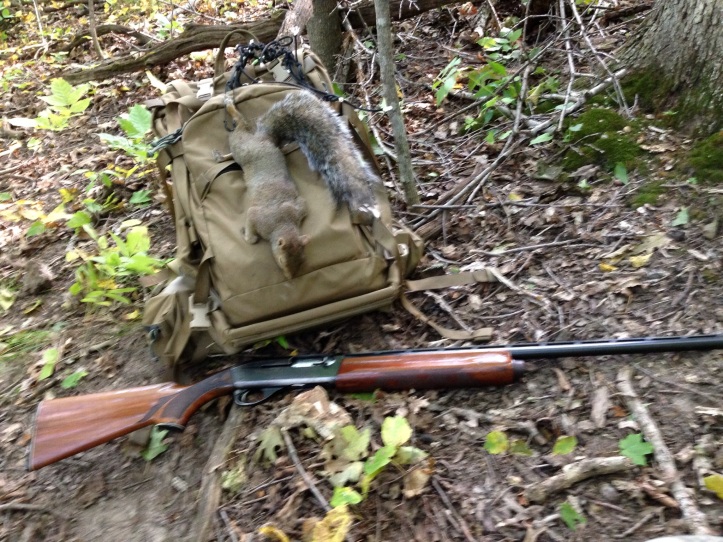 Tell a fellow hunter you are going squirrel hunting and they usually break into a smile. Tell him you want to kill a squirrel in all fifty states by the time you are 45 and they usually break into laughter. Having graduated to big game or waterfowl, most adult hunters no longer pursue squirrels (if they ever did) seeing it as kid’s hunting or something only certain ethnicities do. Non-hunters will often grimace and make a face asking if you actually eat them or have you tried hunting in the park. Nevertheless, I invite you to reconsider squirrel hunting.

It’s true–squirrels are a great way to introduce someone to the hunting lifestyle, especially kids. First, they are plentiful. Nearly all states have a long season and at least two species to pursue. Moreover, people don’t mind sharing a squirrel with you, unlike deer or turkey. Also, the skills learned hunting squirrels translate to all big game species. The method I used today in killing a pair of squirrels is the same I’ve used to kill wild boar, whitetail deer and even a bear. Spot and stalk, calling, using dogs and drives are popular methods of filling a limit.

Another reason to hunt squirrels is simply the taste. A case can be made for squirrel being the most versatile of all game. From exotic dishes such as paella to down home comfort foods like squirrel dumplings I believe squirrel is the easiest game animal to present to new wildlife eaters.

Finally, if you like to hunt and like to explore new places (or are intimately involved with someone who does) you’ll find squirrel hunting pairs nicely with travel. Scouting and understanding squirrel habitat is important, but generally it’s not as complicated or as time consuming as waterfowl or big game. You can have a fine morning hunt and see the sights that afternoon.

Already, chasing squirrels has taken me many places. When I was twelve, a small sign no bigger than a posted or no trespassing sign pointed the way to a field trial and competition squirrel hunt. Dogs such as Jack Russell Terriers and Labrador Retrievers whined from pick up beds and leashes while lowered tailgates displayed rows upon rows of beautiful fox and grey squirrels. That afternoon, a monstrous cast iron pot served heaping bowls of New Brunswick stew. I was hooked.

Though a hunter, my dad never squirrel hunted in large part because he didn’t know how to clean them. Nonetheless, I convinced him to drive me to Berryville, Arkansas for my own canine, an American Saddleback Feist. This was only the second time I’d left Texas. Later I ventured to a hunt near Robbers Cave, Oklahoma for another squirrel dog. Now I no longer use dogs, but my passion for squirrel hunting remains.

This afternoon I killed my first two squirrels in Wisconsin (more details on this fabulous hunt to come) and in a few days I’ll get to hunt in Minnesota. By the end of this season, my hope is to have taken a squirrel from the entire Mississippi drainage with hunts planned in Georgia and South Carolina as well. Ultimately I want a squirrel from every state before I’m 45. Expensive? Not too bad. Fun? You bet. Is it even possible? I think so.

I’m not going to lie, Hawaii is going to be difficult. Current regulations are unclear regarding squirrel importation and shooting in Hawaii. Though I do think trying to slip a squirrel in my pants past the TSA would be amusing.

What about you? Have you squirrel hunted, if so where? What’s keeping you?