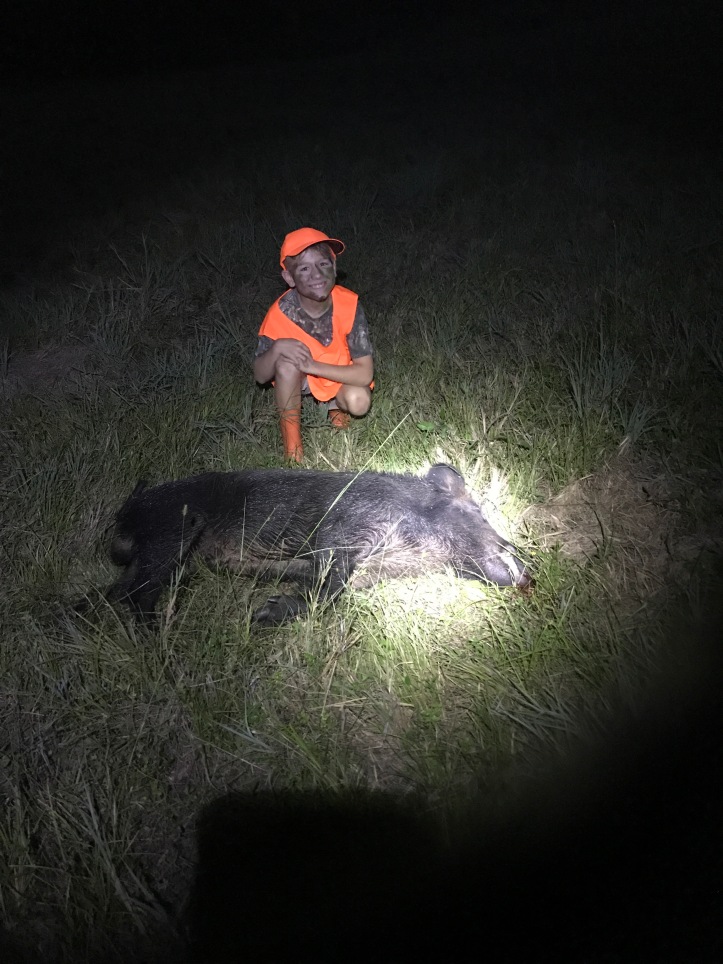 I thought, “Dude is that a cow, or a bear?’  as the big black pig stepped out of the yaupon holly in front of us.  Keegan, nicknamed Captain for the Captain America costume he wore constantly during his 4th year of life,  turned over his shoulder (he was looking the other way) and stood up slowly so his 8 year old frame could see out the front window.  The pig was in a half trot, half walk, ambling its way toward us.  It would stop and start.  Our box blind was roomy, but that extra room meant sitting on one end made it impossible to shoot out of the opposite without standing up.  Keegan crept and climbed onto my knee and steadied the little .243, searching for the moving target as it closed in closer and closer to us.

Suddenly the pig smelled us and ran 30 yards away and to our left.  I lifted Captain’s rifle, moving it from the center window to the left window and he steadied himself.

I’ve made it a habit of applying to all of the in-state drawn hunts I can.  This year we have been drawn twice and on one the dates didn’t work out for us.  But boy howdy, the hunt last weekend was a dandy.  A gun, either sex, deer hunt with unlimited pigs was on the menu for us.  No guns for adults, strictly a youth affair.

My dad came down to help, and I put my oldest son with him and my 8 year old with me.  We were able to choose our hunting compartment based on the order in which we were drawn in Austin.  We chose fourth, and elected to hunt a pipe line clearing well away from the rest of the hunting areas.

Keegan and I’s stand was on the way to Oliver and Dad’s.  They dropped us off and drove on to their location.  As Keegan and I settled into our stand, a shot rang out from the direction they drove.  Naturally, I worried a shot so soon would be an accidental discharge.  I immediately texted .  Of course, when they didn’t text back I started to get a tad uncomfortable.  But here’s what happened.

As dad unloaded his UTV, a sounder showed up in the first shooting lane.  Oliver saw them from the blind and told Papa still standing just outside the box blind,

“Do you want to shoot them?”

And before Papa was even in the stand, Oliver had a pig down.

It’s now only 1:00pm and rules stated if you weren’t in the blind by 3:30 you couldn’t hunt the rest of the day.  I’m faster than my Dad cleaning pigs, so we decided he’d stay with Keegan and I returned with Oliver to skin and quarter his. Still we needed to hustle because the cleaning station was a couple miles away.

We were in a hurry and so we didn’t weigh this one.  I’m guessing about 80-100 pounds.  Nanny Stringfellow has a fine place to process big game. 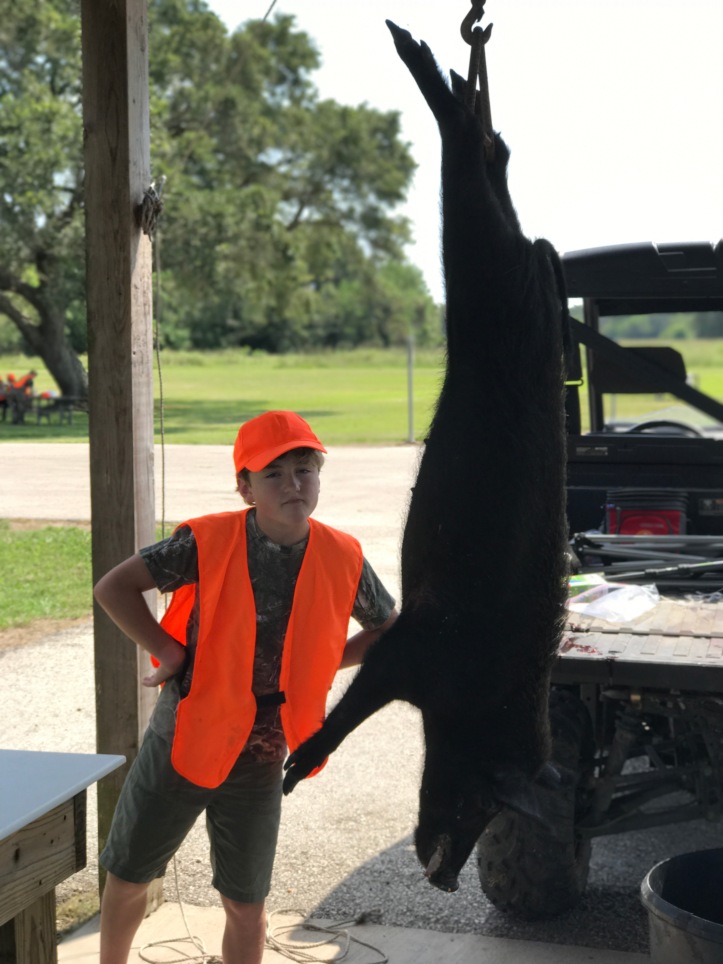 Oliver’s bullet passed right through the atriums and the pig didn’t stand a chance. 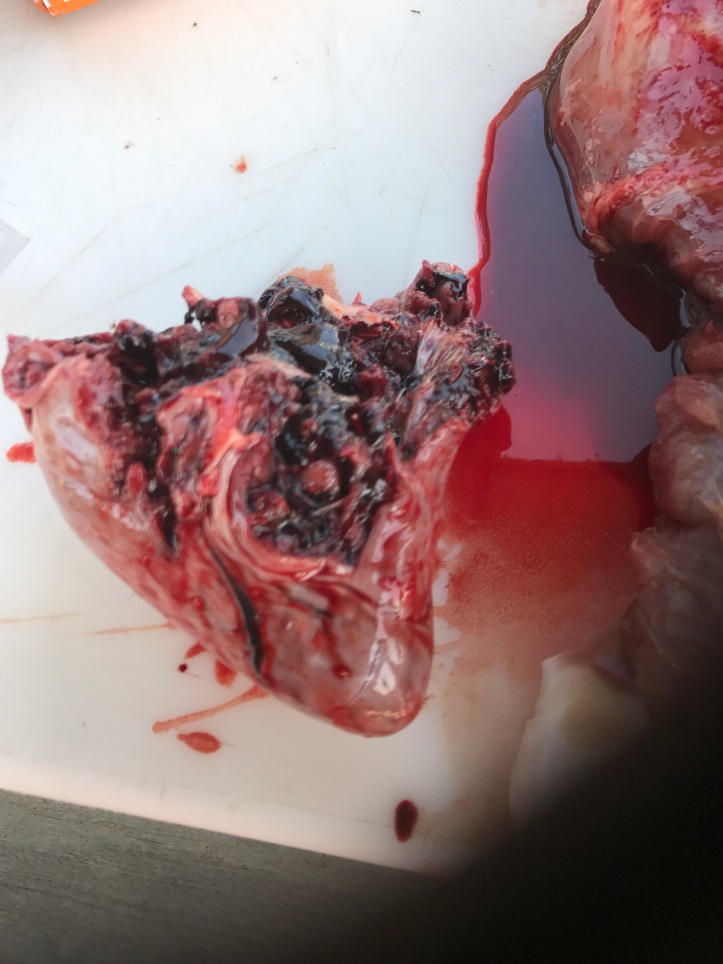 Pork on ice, I climbed back in with Keegan around a quarter to three.  Oliver and Papa returned to their blind and the wait was on.

Suddenly, a group of pigs shows up for us.  At the range, Keegan doesn’t dally when getting ready to shoot.  In fact, he’s a quick shot and surprisingly accurate.  However, I’m not accustomed to such rapid fire and my camera work was too slow.

We waited about 20 minutes to check for blood.  A pig’s fat will often clog bullet holes making tracking them almost impossible.  However, with no squealing or limping, I’m sure he missed.

While waiting, a raccoon visited.

As we watched the raccoon munch our corn, a “megafat red pig” passed by Oliver and he slung lead in its direction.  No blood, but according to the grandson/grandpa combo, an apparent hit.  Staggering into a knee deep swamp, the megafat red pig squealed in rage.  I think this rage intimidated the dynamic duo and they elected not to wade in after it.

A little while after that, Oliver missed a long shot on another sounder.  He also failed to find in his scope a pair of doe crossing his area, but all the game kept him pumped.

About an hour later, the largest buck I’ve seen not on TV stepped into view and immediately saw us.   Antlers a full 4 inches beyond each ear tip, it looked to be a classic 12 point buck in rut.  Swollen neck, sway backed–a thing of beauty.  Just at the edge of Keegan’s shooting abilities, he took his time and fired.  Miss.  We looked hard for blood both during daylight and after.  Nothing.  No blood, it didn’t limp off, or fall down.  Bummer!  After an hour of looking we got back in the stand.  After dark, we looked even more with no success.

Shortly after getting back in the stand, Keegan slammed the aforementioned hog.  A big one!  160 pounds of pure pork perfection.  Returning to the skinning station we found a backup of youth hunters skinning nice bucks, big and little pigs and lots of doe.  Keegan enjoyed dawning the gloves and helping me with his very first game kill.  I’m super proud of my guy. 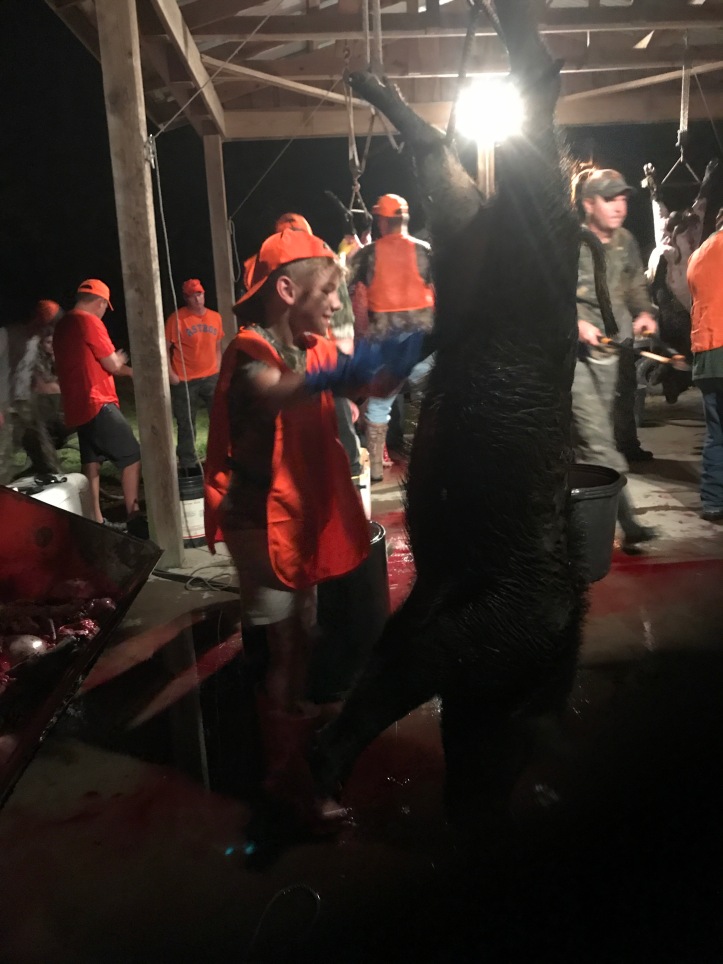 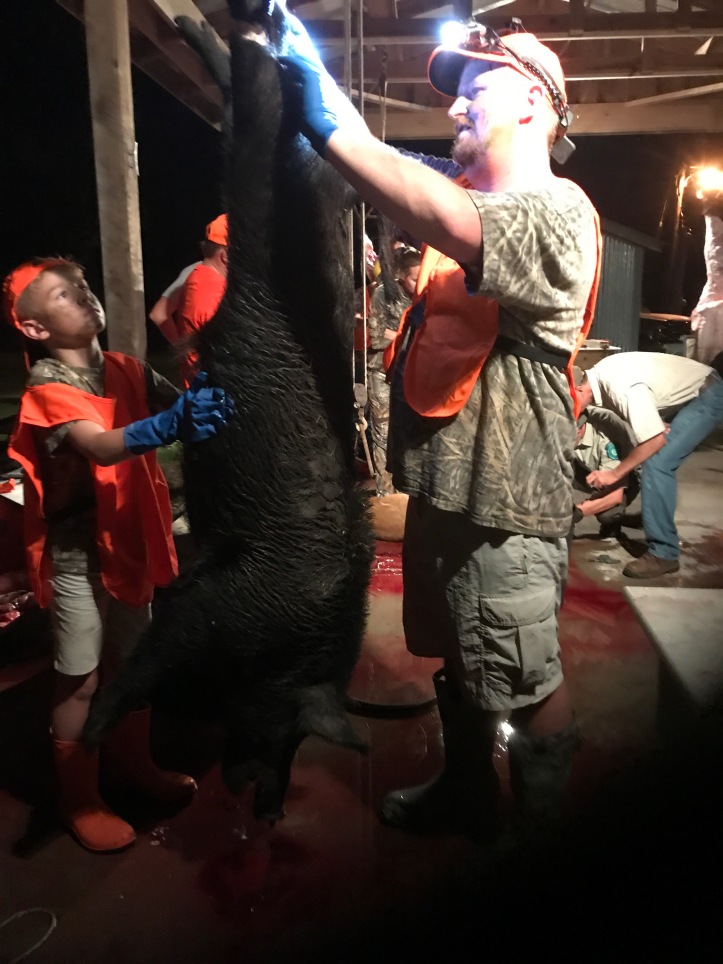 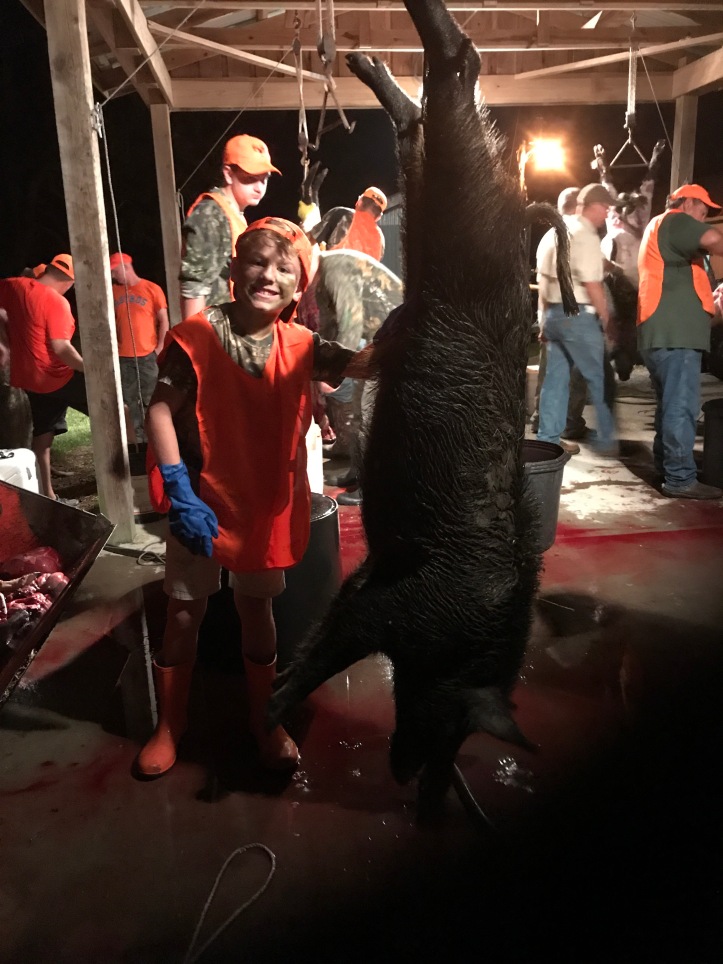 Sunday came and Oliver and Papa picked up where they left off.  In Papa’s own words:

“Life is good in Yellowbush! After traveling to the coast to guide my grandson, Oliver, on a trophy whitetail/hog hunt at the Nannie Stringefellow WMA, where he proceeded to anchor a nice pig before I could unload our ranger, we sat from noon until dark in what I’d describe as nothing less than a sweat box. We reigned terror on several large and vicious ferral hogs in the ninty plus degree heat. We saw several large deer, but the young pup was unable to get the bead on any of them. In the other stand, the young huntsman, Keegan Spencer, dropped a “gianormous”, his word, hog with an earhole shot that would make any granddad proud, under the watchful eye of his dad. We finished skinning the beast around ten that evening. It was a long day. Then next morning, the eager young man under my care and guidance, spied a nice buck at about sixty yards. With the stag approaching straight away, I, in my infinite wisdom, counseled to wait for a broadside shot. Advice was taken, and the good eight point buck dropped like a bad habit. Not looking forward to another hot day in the sauna, we opted to depart the torture box for home, where we ground the swine and venison into future sausages and chilli. Watching these fine young men make the transition from bb guns to rifles is good for the soul.”

All in all, fantastic weekend.