Review: The Pull Pal and an Off Road Recovery Group

Getting stuck sucks, but one experience every man getting after it in the outdoors will experience.  I’m not talking about a Prius stuck on the lawn at a Shakespeare Festival,  but of disappearing axles, water through doors, or exhaust pipes turning ponds into bubble baths for the muddy.  I’ve attempted numerous methods of self extraction, none as good as the one I witnessed last duck season.

I was cruising to my duck hunting location on a rainy morning.  The little ranch road was elevated, with a slight tilt to the right.  On my left was an irrigation canal, about the size of a small river. To the right was a  swampy plowed cotton field.

Poking along the road, going slow because I knew there were some potholes ahead, I had all four of my tires simply slide right.  No gunning it, no turn, just simply slipped off the road.

I was in a jam, there was no traction at all.  I figured I might as well duck hunt, since I wasn’t going to wake anyone at 5:30 to get me out. But I was far from panicked.  Big woo, been here before.

Except, the rain.  My goodness.  It just kept coming down so hard.   I did get a limit of ducks.

Starting about 7, I send SOS’s on Facebook and text everyone I know who might be willing to help me out.  A couple friends send some help, and at 8:00 I walk out to meet the first of my rescuers.  A high school boy in a dually pickup.  He gets to within 200 yards and chickens out.  The road by now was super slick, and getting worse by the minute and by the yard.

I thank him for coming out and he heads to class. My next helper is a a guy with a tractor already on his trailer and says he’d be happy to swing by and jerk me out.  The rain has let up some, but things are not looking good.

Our attempts at this point make the situation worse. 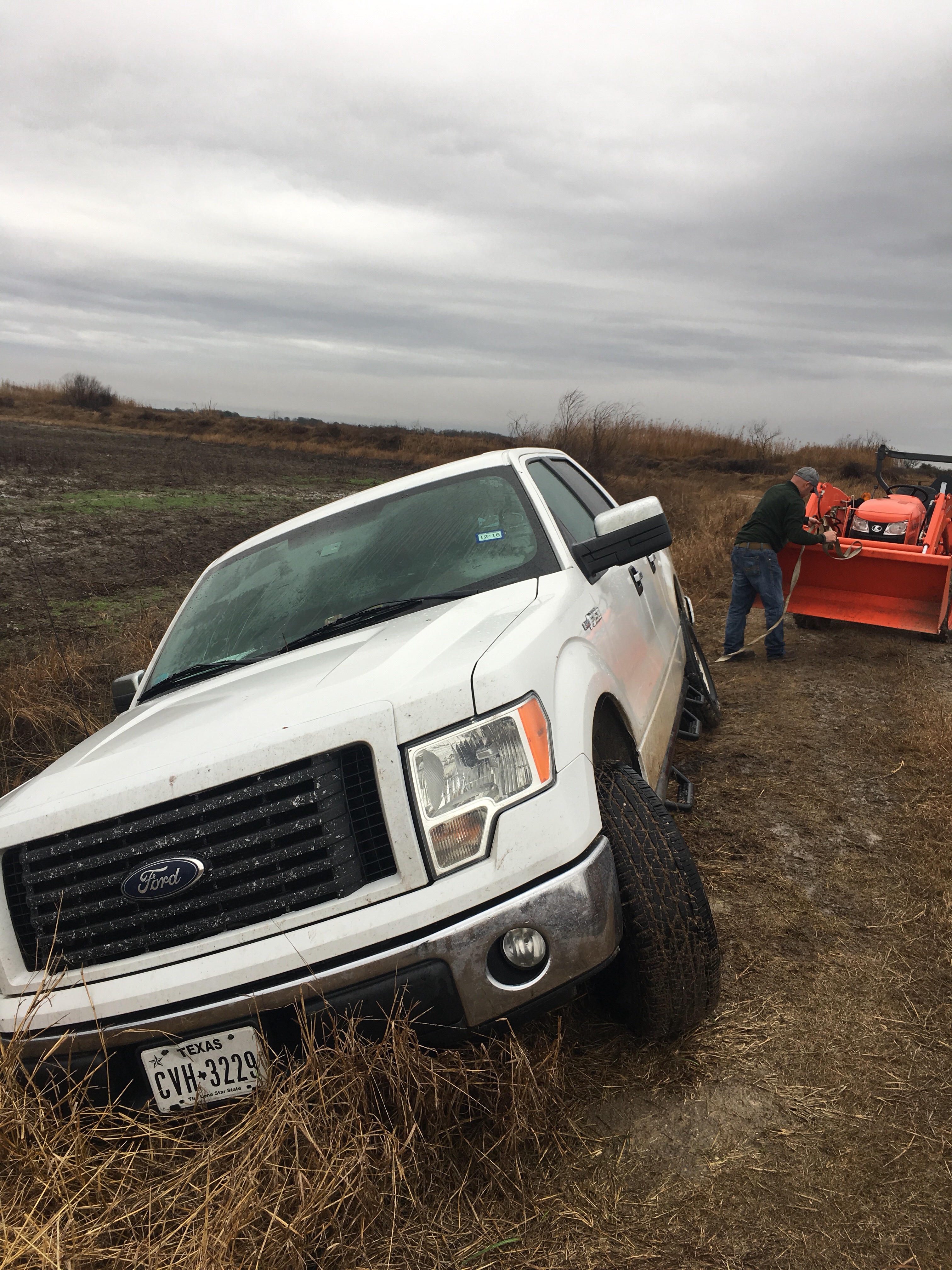 When he starts pulling me back the front end of my truck slips into the ditch, and he cant get any traction on the wet road.  Shortly after, my back in falls as well.  He then takes his tractor to see how the field is, thinking maybe he can pull me through it.  On the way back he almost gets stuck on the road out.

I walk out to tell him to give up.  Now my truck is at such an angle, I think it might roll over.  I call the wife to come get me.  Meanwhile, a farmer with massive tractor comes out and says I’ll probably have to wait till Monday (4 days later) when it’s dried up some.

At this point, I’m looking at my situation as more of “wreck” than being stuck. 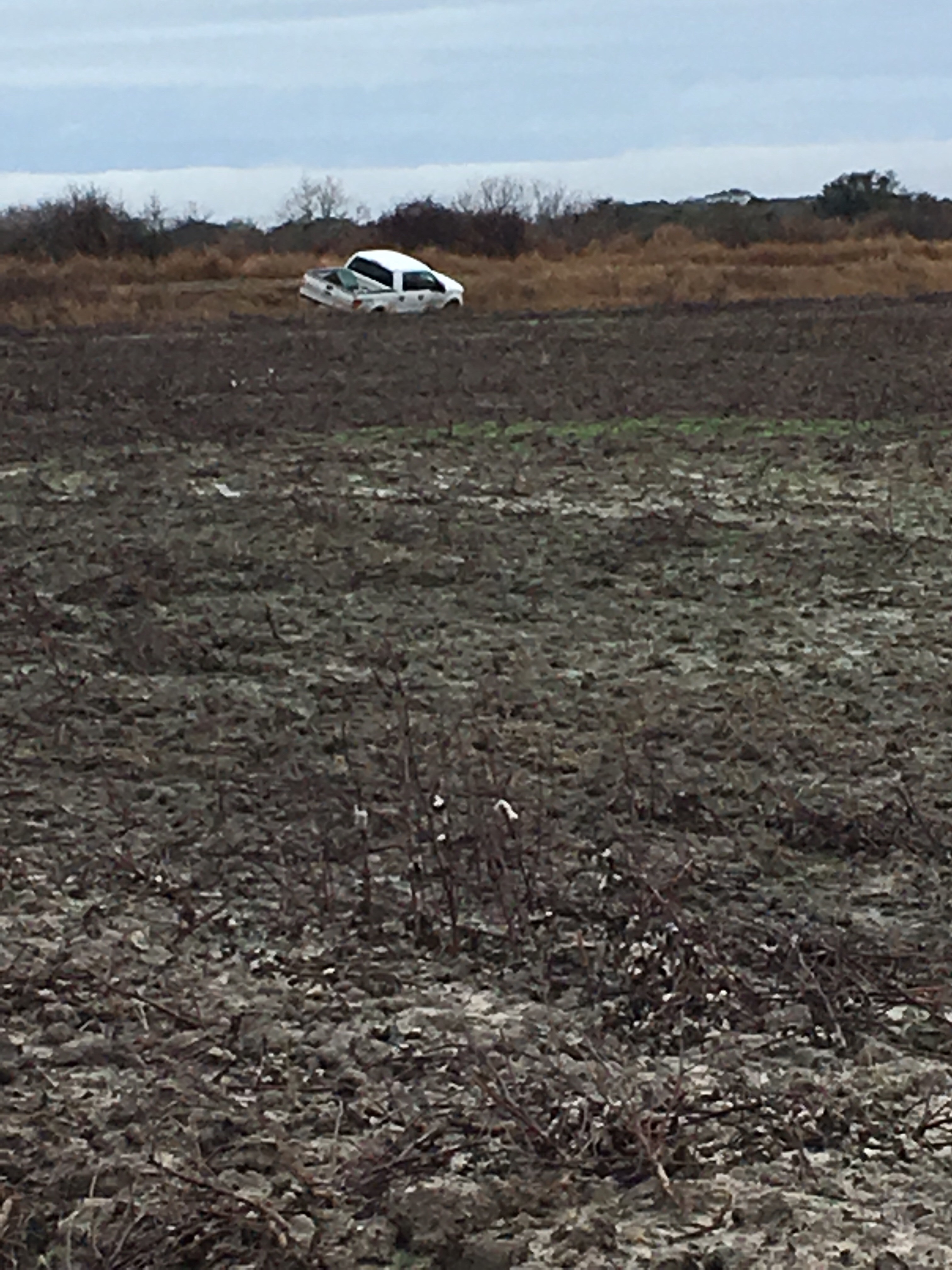 I call my wife who comes and picks me up.  I get my valuables out, and we go back to town to regroup.

Meanwhile, a friend alerts me to a facebook group called Houston Area Off-Road Recovery.  I’ve since learned there are groups like this all over the country.  These are people who enjoy the challenge of rescuing stuck vehicles.  I join the group, post my situation, and within a span of 2 hours I have people fighting over the chance to rescue me.  Plans are being discussed, people are private messaging me to not give the location so they don’t have to “share” the pull with anyone else.

What’s awesome about the recovery group is 1) they don’t charge any money 2) they love doing it.  So my really bad decision didn’t cost me money, nor did it totally inconvenience a friend.

One member of the group says, he’ got it since he’s local.  Turns out he lived about 70 miles away, but who’s counting right?

Nonetheless, I was worried about meeting a total stranger, in a very remote location. I got my buddy Michael to tag along, for safety and fun.  Double murder is much better than single.  As we met up with my Recovery Man, another friend Jeremy calls and vouches for Recovery Man as being a swell dude.  Jeremy then decides he doesn’t want to miss out on the fun.  Now we have a 2 ton 4wd pickup, two jeeps with wenches, and one of the coolest inventions I’ve seen yet.

“The Pull-Pal – a U.S. engineered anchoring tool, is both portable and well-suited for a wide range of environments. Intended as a tool for winching through sand and mud, Pull-Pal’s design relies on useful rules of physics. Its hefty plow blade sets firmly and safely into sand, clay, mud hardpan soil and snow. Pull-Pal gets you up and over hill stalls and minimizes dangerous situations.” 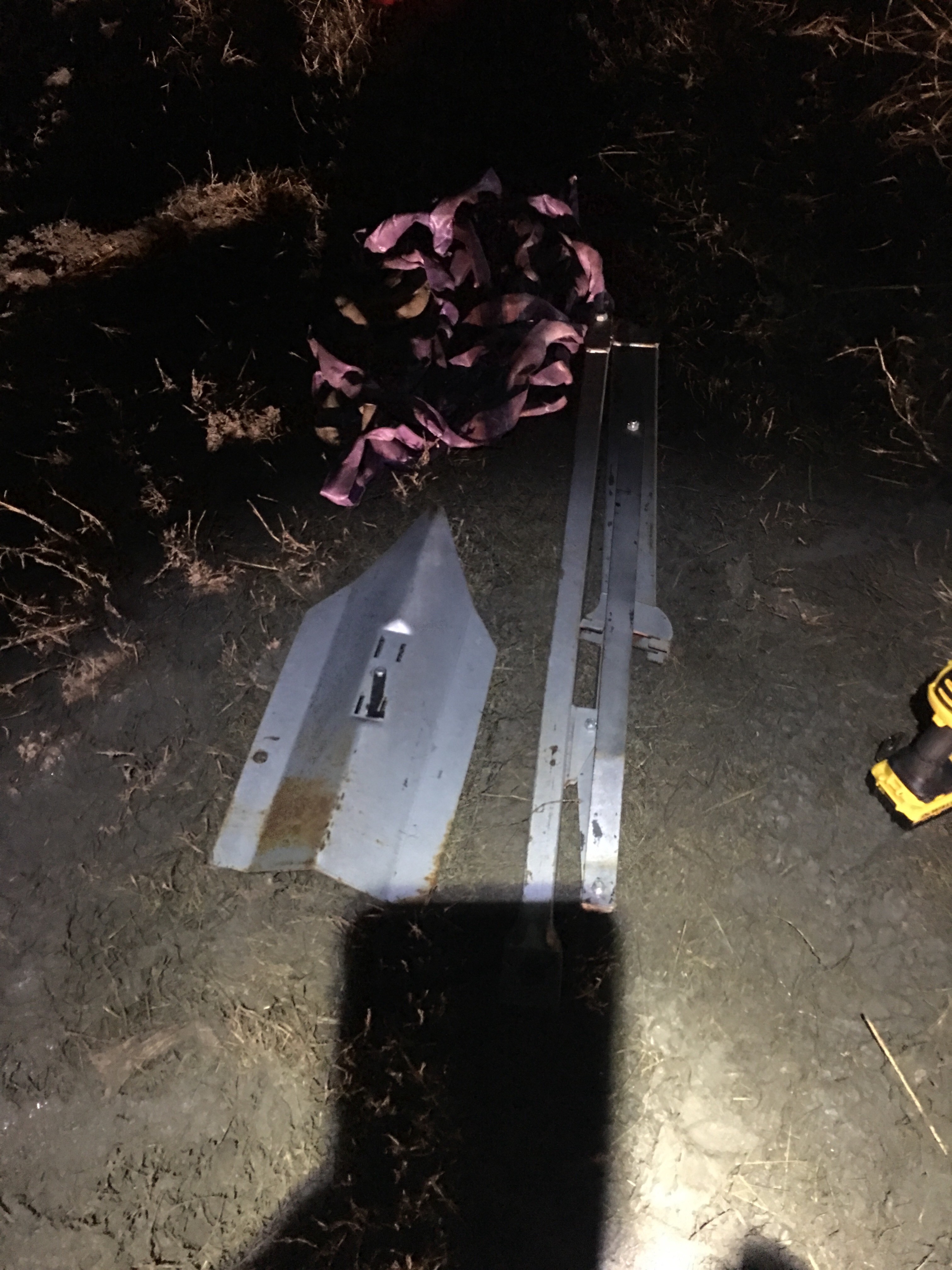 The issue was we couldn’t pull my truck straight up onto the road with another vehicle because of the canal behind the road.  The cotton field was out of the question.  We had to somehow pull at a right angle and that’s why the pull/pal is awesome.

It seemed like it could flip over at anytime.

We take some time getting rigged up.

Below is the first attempt you can see how it worked.

After a few more tries we were out.  It was well past midnight, and I was exhausted, but I was free.  It felt glorious.  I tried to tip my rescuers with a little beer or gas money, but they refused.  Pretty cool deal in my books.

If you want one of these pull/pals, or just want to check them out, click here.

I didn’t think I’d ever get out of this jam. If you get mired in mud and need help, be sure to check Facebook for a recovery group near you. What’s the worst you’ve been stuck?