Life is good in Yellowbush!

I dropped Craig off at Bryan’s popup blind that’s presently in what we call the dark corner, pronounced “coner”, that had already produced a big eight point buck and a spike a few days earlier.

I then went to the pecan grove stand, across from the dark coner, to the south, about two hundred plus yards away.

Craig was looking East, down the tree line, while I looked East, too, but North behind him, also.

With about two minutes of shooting light left, I spy a deer. It’s got antlers!

I throw up my 1986 A-Bolt Browning, known locally as the Big Dog, look through the mounted VX-R 3X9 Leupold scope, place the cross hairs on the shoulder of the buck, squeeze the trigger, and KABOOM!

Meanwhile, over in the popup, after drifting in and out of fairly deep sleep, Craig wakes to finding darkness fast approaching, so begins the task of buttoning up the ship. When he gets to the window he had been looking out, he sees white, so he throws up his scoped 25-06, to see if the deer was legal or not. He realizes the scope was still on 2X power, so he started cranking it up.

Now, Craig didn’t realize I was in the Heyer bottom with him. When I shot, he may or may not have had an accident.

Now some have said, ” Freddie, were you able to see the width of the rack?”

I could tell it was big, heavy, and dark, the way I like antlers to be. I shoot, and that buck jumps about eight feet in the air. My rest was so good that I didn’t pull off of him when I shot, so he comes down, and heads off, fast, directly towards the recovering Craig.

Craig is a favorite of our family, who has proven his marksmanship time and again in a family of excellent shots. Me, I’m just fair. I was, however, always amazed how well I could shoot, when I would hunt next to Craig, or some of the other good shots on the family dove hunts.

So, the deer is hauling it towards Craig, I line the cross hairs once again on the buck, but before I could squeeze the trigger,

Craig shoots, his mark true, right in the base of the neck. That deer rears up like the Lone Ranger’s Silver, then with front legs flailing, he comes down headed directly towards me.

So I’m thinking game is on here. I didn’t like the head on shot, at that distance, anyway, Craig shoots again, and the stag heads east, and I let the big dog bark. I throw my third round in, line it up, but I notice the big boy staggering, then down he goes, and that’s all she wrote. I’m calling it The Spencer/ Tidwell buck, or perhaps the Black Friday buck. Even so, everyday is Saturday in Yellowbush. 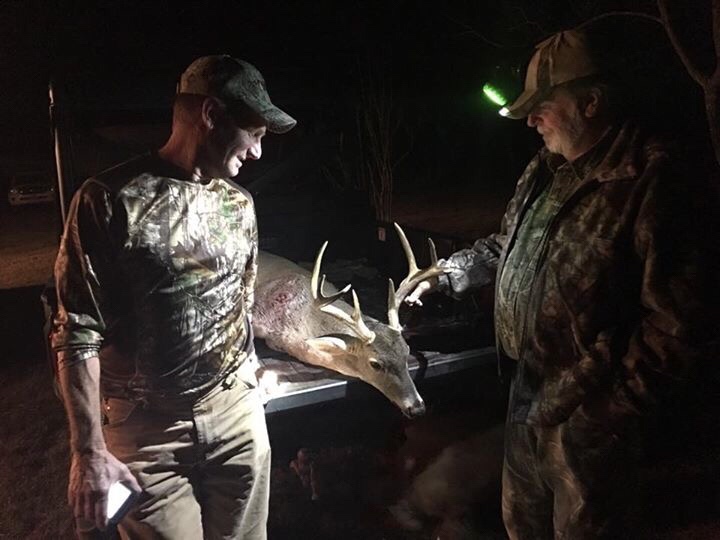