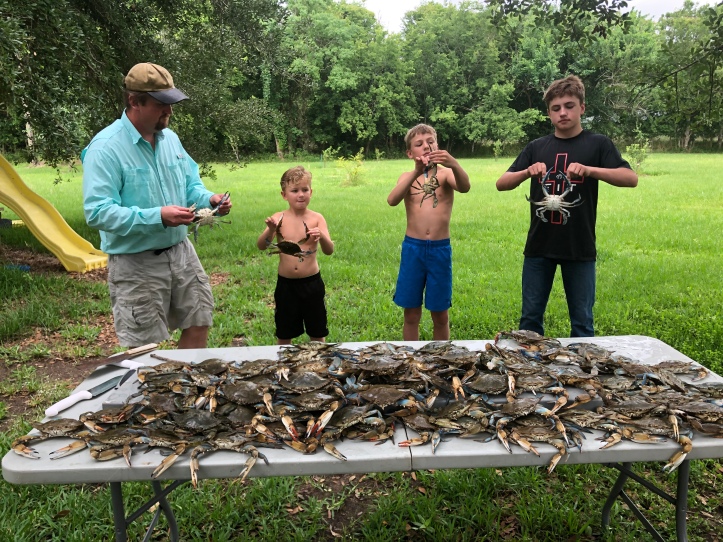 I’ve only met a few dudes in life who I think would not enjoy scooping up critters in nets and playing with them, at least for a little while. If the dudes with you are with are 12, 10, 7 and 4 then things get fun real fast, and it’s such a simple activity every outdoorsman should take a few boys crabbin every now and then.

These are the basics things you need to spend a morning chasing crabs or at least send the kids out to haul some in.

First, get some ring nets. These nets come in different sizes and quality of construction. The west coast versions are much bigger than what’s usually seen here on the Gulf. Of course, the crabs are bigger as well.

To be a complete crabber, pick up some nylon string, chicken necks, legs or any other cheap meat.  A few 5 gallon buckets are pretty much mandatory. Definitely need a long handled net to land your quarry.

Some folks like crab tongs to avoid getting pinched, but we don’t mind risking our pinkies. Don’t forget a cooler with ice, the ice will slow them down and protect your digits. Plus, no spoiled catch.

If you are crabbin from elevation, say a bridge or dock, ring nets shine. With bait tied in the center, you toss it out with a long rope and let it soak for however long you can stand it. Which for me and mine, any longer than 5 minutes is torture. When you pull it up, the crabs are caught in the bowl of the net as the rushing water holds them down. Ring nets can work from the shore with minimal elevation, but not as well as from a distance above the water. Take a look at this ring net in action:

This is from last summer. We were in Medford, Oregon for some hiking, but due to the smoke from horrendous wildfires we had to escape to the coast. Why not do some crabbin?

We rented rings from a local shop and tied on some chicken backs and got after it. We were fishing off of a harbor protected pier in a beautiful little fishing town. The tides were moving, and we were about the third group to hit the 100 yard long pier. 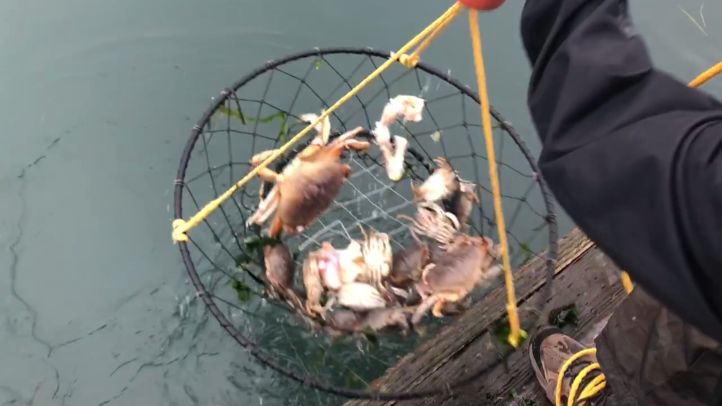 It became apparent we would have no trouble getting a couple meals worth of Dungies in no time. 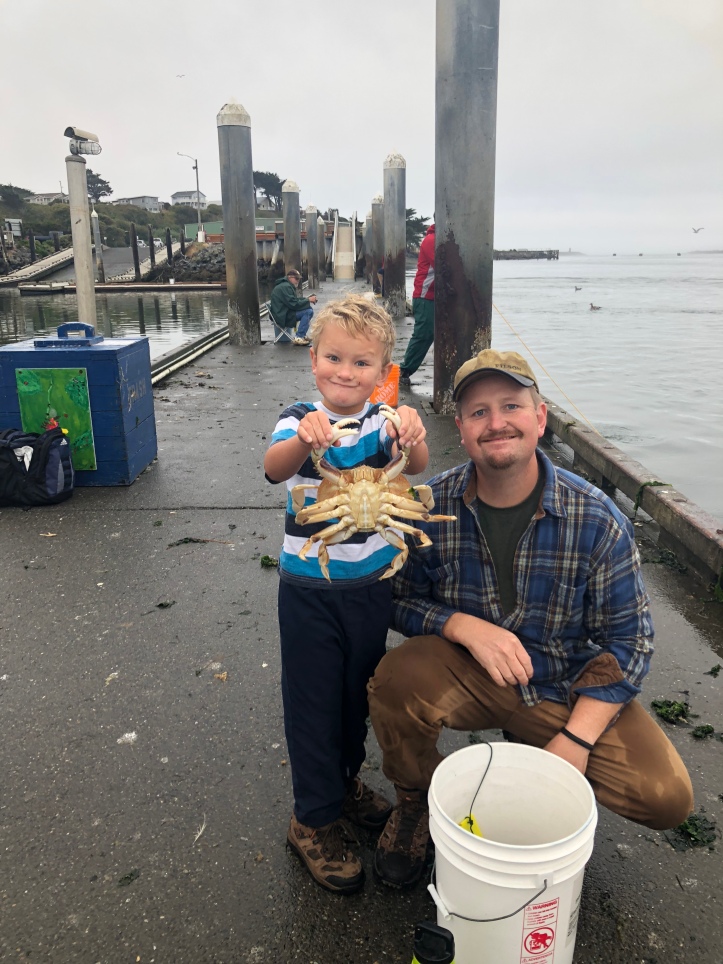 The cold waters of the Pacific mean the big old crabs in it’s waters are much slower moving and less apt to attack than our quick and ill tempered blue crabs. Last weekend we had an excellent morning fishing a fast flowing bayou by the intracoastal on Battle Island.

When we arrived to our spot our hearts sunk as about 10 pickups were parked at our top secret crabbing spot on Battle Island.

But as we pulled in, we realized they were all kayak fisherman going after specks, reds and flounder.

We could crab around their trucks. No biggie. But one truck we had to avoid. I guess the guy got hit hard by the stomach pains, because upon arrival it was apparent he dropped trousers and laid a big old stink pickle on the road side of his truck.  Besides being disgusting, it was sort of bold.  This is salt prairie, very little in the way of bushes to squat behind, and it is a few miles out of town.  Granted, rattlesnakes frequent what little grass there is for cover. But At least the water side of his truck would have yielded a little privacy had a car passed, but he just did it right there in the open.   Keegan quipped maybe that’s as far as he could make it. We may never know. I did toss a little box over the turd, just to keep the gentle ocean breeze from spreading its perfume and a potential foot fault from one the boys. 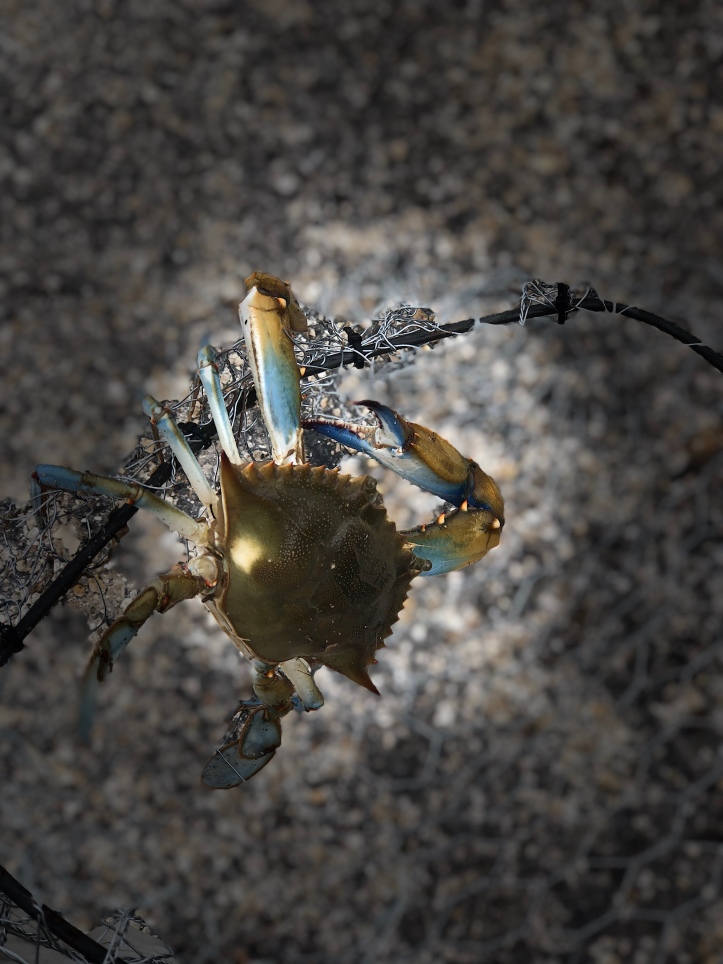 There were a few bank fishermen as well, and they didnt mind the boys crabbin beneath their casted out lines. I have no doubt several of them wished they were crabbin instead after we started catching.

I planned on making a day out of our crab grabbing and so brought our box crab trap. On the west coast they are called pots. I’ve found you need at least 6 hours to make it worthwhile, so while I set it out, the boys started tossing out baited lines.

Before I could get the trap placed, the fellas had three in the cooler and missed twice that many. I always say I’m going to pre-rig the lines and nets at home, but I never do. So it took a while to get them all set, because we were running between lines bringing them in.

One blue crab attacked my finger like a savage Karankawa and clamped down so hard it made me bleed through my finger nail; and Keegan got a couple of his fingers caught, too. They mean business, and we had to pull their claws off to get free. Careful out there.

The vast majority of this weekend’s crabs fell victim to the simple string with chicken neck or drumstick on one end and weight on the other. I perfected my this technique in the fourth grade when Bailey Baker showed me how to do it with bacon to catch crawdads. Toss the bait in the water, and when a crab takes it, slowly pull it in. Crabs are used to tug a wars for their food, so the pulling isn’t something that scares them away. If they drop it, let it sit and they will come back and grab it. As you pull it in, get ready to scoop it with a long handled net. We customized our long handled scooping nets by removing the nylon netting and replacing it with a basket of chicken wire. This way the crabs don’t get tangled and are easily dumped into a bucket.

We set out as many lines as we can manage, which depending on how fast the fishing is, is anywhere from 10-20. If it’s slow, you can set a timer and check them. If it’s fast, you will constantly be going up and down your line pullin crab.

At first, the boys missed several good ones, but eventually they worked it out and became expert crabbers.

We started at 7:45, and by 11 we had two coolers full of semi chilled and angry blue points.

We got home, added some ice to the coolers, counted them and started cleaning. 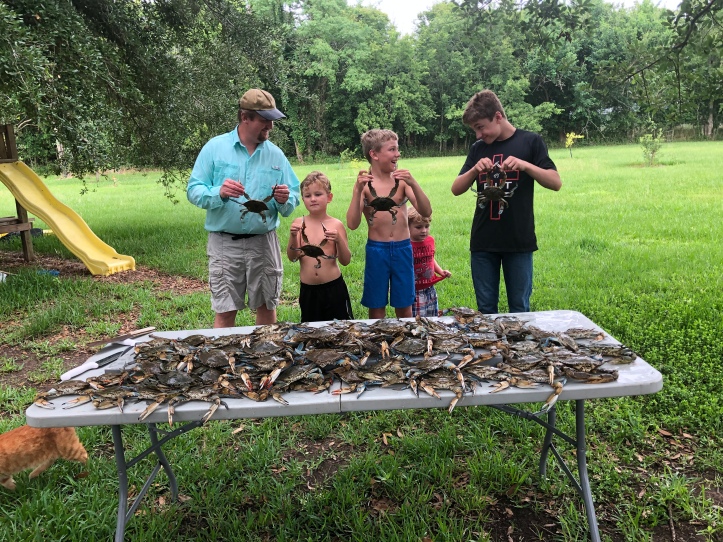 We made an assembly line to clean them. Learn how we do it right here. 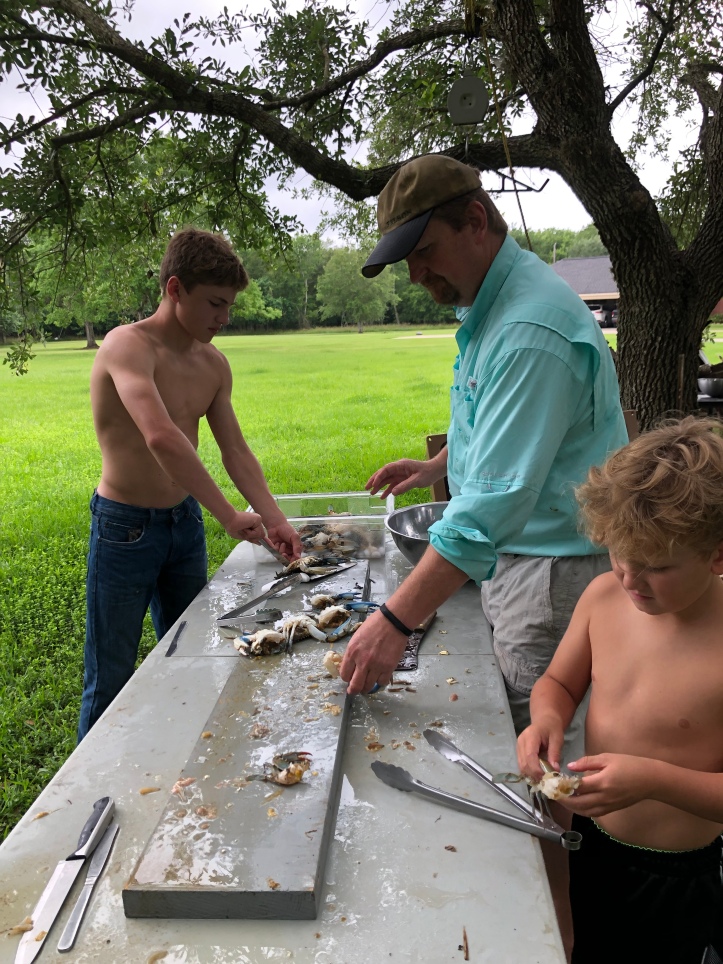 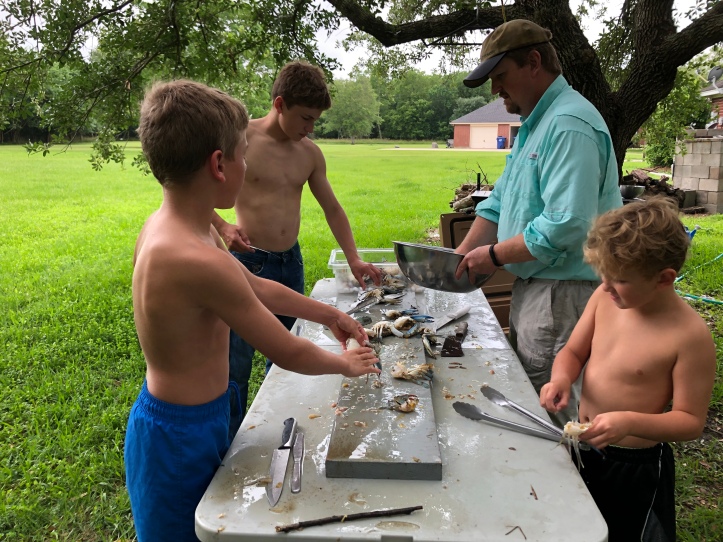 This dude was excited to help clean them. 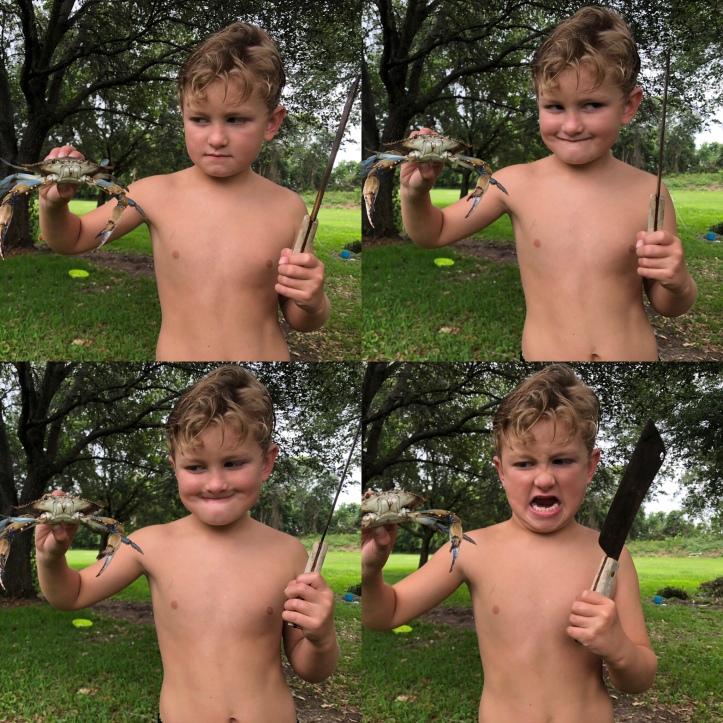 Here are my crab recipes and I have some more coming:

This is how we crab. If you are a fellow crabber got any tips to share? Any East Coast crabbers out there? How do you guys do it?